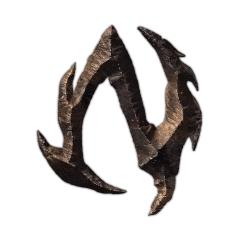 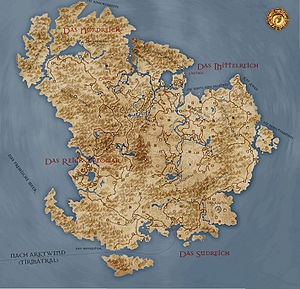 Nehrim is a Total Conversion for The Elder Scrolls IV: Oblivion. After the merger in April 2005 began planning for Nehrim, the largest and most elaborate project SureAI. The development of Nehrim - The Edge of Destiny, based on the engine Tes 4: Oblivion began in March 2006 and ended in June 2010.

Nehrim, like SureAI's previous projects Arktwend and Myar Aranath, takes place on the world Vyn. Nehrim is the only country in Vyn that is not ruled by a God.

Nehrim is a large continent with several climate zones, between Arktwend to the west and Inodan to the east. It is about 35-40 square kilometers in size.

Nehrim itself is divided in four countries:

The mountainous Northrealm has the fortress city Cahbaet as its capital. Pine forests, ice and snow cover the slopes of tall mountains. Ever since King Taranor split away from the Middlerealm empire, there has been a war between the two countries, and whole areas of the border have been destroyed and devastated. Cahbaet itself has been under siege for weeks.

The Middlerealm with its powerful capital Erothin, which lies on an almost impregnable peninsula, is the heartland of Nehrim. Typical of this region are moderate climate and deciduous and mixed forests, as in Faltrindtal or the Forest of Salathin, but there are hills and mountains, and cultivated farmland near the capital. It is governed from the large bell tower in Erothin by Chancellor Barateon. It is the largest and richest country in Nehrim.

Between the southern coast and a mountain range lies the Southrealm. The port city Ostian is its intellectual and cultural center. The temple of the cult creator ruled there from his residence high above the city, the population of the whole country with an iron hand. Throughout the kingdom a tropical climate prevails, with beaches, coves and palm groves. To the west lies the great stone desert. To the east is a mysterious crater surrounded by magic-altered lands.

On the west coast, adjacent to the other three countries, is the ancient kingdom of Treomar whose capital bears the same name. Almost no one lives here; everything is destroyed and abandoned. Only within the capital can the former splendor of this once great metropolis be guessed at; all else sunk into ruin one thousand years ago, when the gods destroyed it.

In the course of the adventure are also other countries Vyns traveled, for example, Arktwend or Inodan.

The game is set in 1017 after the fall of Treomar.

At the beginning of the game there is war between the Middlerealm under Chancellor Barateon and the Northrealm under his former vassal Taranor.

The Southrealm is an absolutist theocracy that dominates and the enslaves the people.

The kingdom and the city Treomar are a field of ruins, destroyed over 1000 years ago by the Lightborn.

Magic is banned in the Middlerealm, but the order of battle mages Erothin and the Registrar under religious hated Merzul has the right to exercise it.

In contrast to previous SureAI projects, Nehrim contains far-reaching gameplay changes in the form of new skill and magic systems. Nehrim development focused a great deal on gameplay and action. The Oblivion leveling system, in which all game content depended on player level, was abolished. A new system of experience and learning points was implemented, which complements the "learn-by-doing" system native to Oblivion. Your level no longer depends on skill increases but instead on experience gained. Upon level-up, you get learning points, which can be used, together with gold, to purchase skill increases from trainers. While skills continue to improve with application, they only increase at one-third the rate in vanilla Oblivion.

Unlike in vanilla Oblivion, there are many rare or unique items that can be obtained by exploring the world and the dungeons in it.

To play Nehrim, a fully patched and working version of The Elder Scrolls IV: Oblivion is needed. However, no plugins or expansions are required; you do not need Shivering Isles nor Nights of the Nine. It is recommended (but not required) that you play with at least 1.5 GB of RAM.

Nehrim has numerous visual enhancements compared to Oblivion. Apart from an increased level of detail in most dungeons and landscapes, some texture resolutions have been increased. Other changes include improved water surfaces, weather effects, all new lighting, and improved atmospheric effects.